John Brown, considered a fanatical abolitionist by some and a martyr by others, is closely associated with the proslavery and free-state struggle of the Kansas Territorial period (1854-1861). John Brown followed five of his sons to Kansas in 1855 where he saw an opportunity to help make Kansas a free state — bringing a wagon load of weapons along with him. He made headquarters at the log cabin belonging to his half-sister Florella Adair and her husband, the Reverend Samuel Adair.

In May of 1856, a small party consisting mainly of Brown and his sons raided the cabins of proslavery men, killing five of them. Up to that time there had been little bloodshed between proslavery and free-state groups. Brown’s raid brought retaliation. On August 30, 1856, Brown and his followers were attacked by a large force of border ruffians. In the “Battle of Osawatomie” five of Brown’s men, including one of his sons, were killed and the town of Osawatomie was burned.

Brown was in and out of the area over the next few months and took part in the border skirmishes near Ft. Scott. Later, on December 23, he made a raid into Missouri to liberate slaves and other property from slaveholders. The group was hidden in the Adair Cabin and later safely made their way to Canada and freedom.

The John Brown State Historic Site is located in beautiful John Brown Memorial Park, which was dedicated by President Teddy Roosevelt in 1910. The family-oriented park sits on the site of the Battle of Osawatomie and houses the John Brown Museum, which includes the original Adair family cabin. Through artifacts and interpretation, visitors learn about the struggles of these early pioneers.

The Adair cabin, originally located just outside of town to the west, was carefully dismantled and relocated to John Brown Park. It is encased in a protective stone pavilion to help preserve it for generations to come.

It took hard work and courage to take a firm stand against the spread of slavery into Kansas Territory. Kansas was admitted as a free state in 1861. 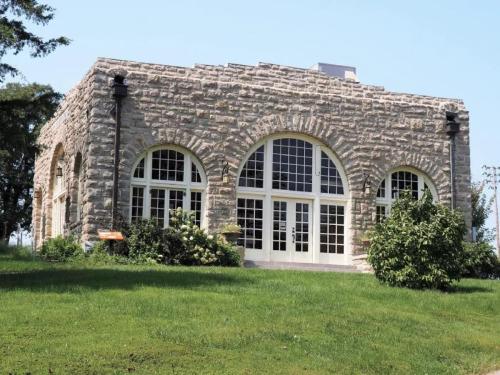 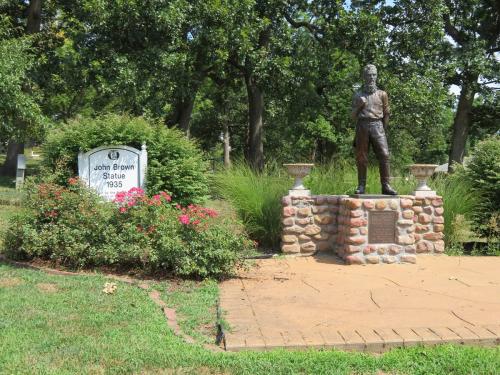